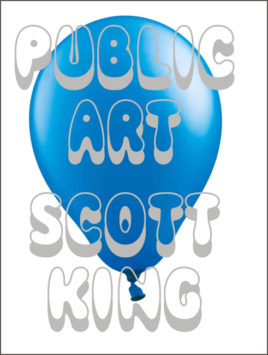 Public Art by Scott King brings together a series of proposals inspired by the relationship between contemporary art and urban regeneration.

King’s ‘what-if?’ scenarios include A Balloon for Britain, in which the artist devises a scheme to re-invigorate the country’s ten poorest towns and cities, Postcards from The Sculpture Park, printed ephemera from a holiday camp-cum-correctional facility, and Infinite Monument, an audacious proposal to rebuild the Tower of Babel.

This publication includes three graphic novellas illustrated by Will Henry: Anish and Antony Take Afghanistan, I Dream of Dalstonia and New York Rural, the second of which imagines pop-up/independent coffee shop/microbrewery culture as a tool for fundamental urban renewal.

The political, cultural and economic issues that bind public art and urban regeneration are further examined in texts by Owen Hatherley, Andrew Hunt, Tom Morton and Matthew Worley and in interviews with Robert Hewison and Lynda Morris.