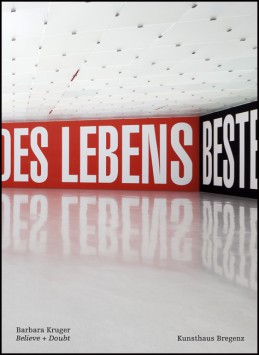 The concept of the exhibition at Kunsthaus Bregenz, and the new work which has been especially produced for it, is examined in Yilmaz Dziewior’s introductory essay. The catalogue’s comprehensive documentation of the installation in generous photographic spreads, designed in close cooperation with the artist.

Published on the occasion of the exhibition Barbara Kruger: Believe + Doubt at Kunsthaus Bregenz, 19 October 2013 – 12 January 2014.