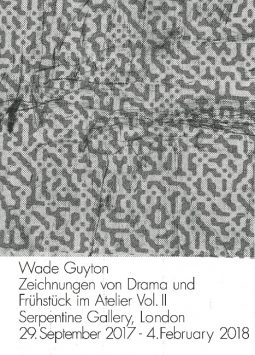 Guyton is interested in the translations that take place between these tools, transforming three-dimensional space into digital information that is subsequently reproduced on surfaces and in space.

Guyton’s exhibition at the Serpentine Gallery, Das New Yorker Atelier, Abridged, presents a new body of work, all of which has been completed in the past two years, originally developed for an exhibition at Museum Brandhorst in Munich (28 January – 30 April 2017).

This is the next in the series of his, Zeichnungen (Vol. 5) artist’s books, produced on the occasion of his exhibition at the Serpentine Gallery, London (29 September 2017 – 4 February 2017).

It depicts a collection of book pages, printed over with photographs, bitmap files, and screen captures from websites, piled onto his studio’s kitchen floor.  For this version, Guyton covered the floor in black tiles.

Like the other books in the Zeichnungen series, this has no text. 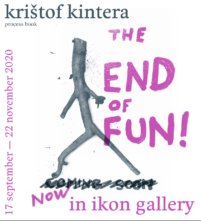