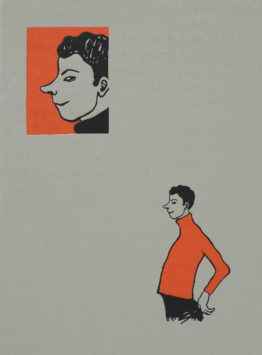 Kantarovsky’s practice encompasses painting, drawing, sculpture and occasionally film. His signature works often have thinly applied, wiped, or scraped layers of paint, and feature narrative scenes populated by isolated, sinewy figures. His paintings frequently include indirect sociopolitical commentary and a critical look at the idea of the suffering artistic genius.

This publication, his first monograph features a selection of recent works alongside his Studio Voltaire commission, Apricot Juice.

A collaboration between Kantarovsky and Lithuanian-born performance artist leva Misevičiūtė, Apricot Juice was devised around two distinct parts – a language and movement based performance by Misevičiūtė and a group of five largescale paintings by Kantarovsky.

The point of departure for the collaborative project was Mikhail Bulgakov’s enigmatic masterpiece novel The Master and Margarita, a narrative woven around a visit by the Devil to the aggressively atheist Soviet Union.