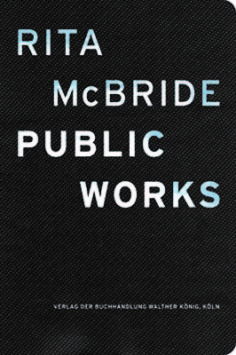 Rita McBride is perceived by many observers to be a sculptor. Yet although she has produced many sculptural objects since the beginning of her artistic work, her pieces are no longer about the object itself, but rather about the situations and stages that arise out of it, also about performance and text, storyline and fiction.

If one wishes to capture the specific relation of McBrideʼs objects in a few succinct words, then they are about design, architecture and public spaces.

This extensive survey catalogue of the artist’s work documents her projects, interventions and exhibitions across the world: from Salford (England) to Vancouver (Canada); and from Munich (Germany) to Mexico City.

Published on the occasion of the Rita McBride: Gesellschaft exhibitions at Kestner Gesellschaft, Hannover (17 October 2015 – 10 January 2016), and at Kunsthalle Dusseldorf (9 April – 26 June 2016).