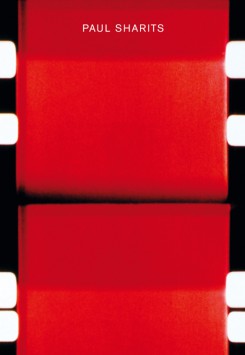 Working with precisely composed 16mm films, the American experimental filmmaker Paul Sharits (1943–1993) created extraordinary cinematic spaces characterized by a degree of complexity and density that is unique in the history of art. This is the world’s first comprehensive retrospective monograph devoted to Sharits’ art.

In his installations and multiple projections (locational film pieces) he transforms film not only into a deeply visual, but also a profoundly physical experience. Meticulously arranged colour compositions (Shutter Interface, 1975), deceptive film-in-film presentations (3rd Degree, 1982) and abstract sequences interrupted by graphic images (Epileptic Seizure Comparison, 1976) form the basis for his reflections on the functions and conditions of the medium of film.

Paul Sharits enjoyed relative acknowledgement during his lifetime, with shows at the Bykert Gallery (NYC), Albright-Knox Art Gallery (Buffalo, NY), and Walker Art Center (Minneapolis) among other institutions, and has been posthumously exhibited at the  Whitney Museum and the MoMA in New York, the Centre Pompidou and the Louvre in Paris, and the Burchfield-Penney Art Center in Buffalo, NY.