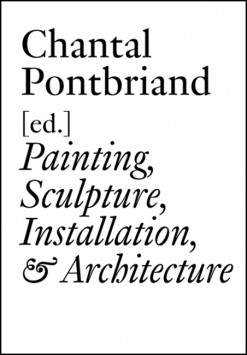 This last title of the Parachute anthology focuses on painting, sculpture, installation, and architecture: the so-called ‘traditional and academic media’.

These are approached from several perspectives: from new theories of aesthetic production, especially painting, to the expansion of the art world to other artistic territories during the 1980s and 1990s (Russia and South America for instance), from the ‘lessons’ of postmodernism to the definition and exhibition challenges caused by the proliferation of installation art.

A contemporary art historian, critic, and curator, Chantal Pontbriand co-founded Parachute in 1975 and edited its 125 issues until 2007. The anthology is an invaluable document of the changes and transformations in both art practice and writing from 1975 to 2000.

The book is part of the Documents series, co-published with Les presses du réel and dedicated to critical writing.