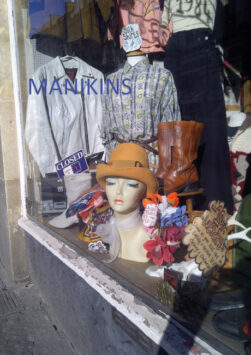 Manikins is an artist’s book which brings together photos of mannequins and shop dummies in different parts of the world (from cities such as Jerusalem, Venice, London, New York, and Vienna).

Made to display and sell clothes, they reflect and embody the aspirations and desires of those who made and use them. Motionless, inanimate, yet bearing the scars of use and grouped in ways suggestive of interrupted action, they seem suffused with melancholy. A melancholy that springs from hopeless longing to escape the shopper’s gaze which is their whole reason for existence.

Alongside these photos are poems from the distant and more recent past which contemplate and comment on the human condition and in so doing obliquely elicit meaning from the images beside them.

Edited and published by the British art historian and museum director, Mark Jones.

£9.50
Buy now
(Your order will be fulfilled by Ingram Publisher Services)