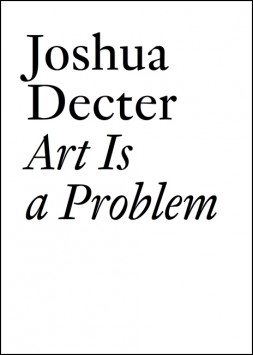 This volume of selected essays, interviews, reviews, and curatorial texts, spanning the period of 1986–2011, represents a significant part of Joshua Decter’s ongoing work as an educator, curator, and critic.

His discourse is driven largely by a productivist vision of the artwork to the extent that Decter rejects the conventional dichotomy of form and content by which art is presumed to hold meaning like a vessel.

Accordingly, he questions contemplative aesthetics and the baggage that goes with it – quality, authorship, connoisseurship, and autonomy. Decter sees the artwork from a public perspective and consistently probes its function as a collective representation, its placement in a cultural continuum, and the social relations organized around it.

Structured in seven chapters, this book revolves around Institutional Critique, the relations of art and politics, the emergence of platforms for art as a new paradigm, the privatisation of the public sphere, the un-definition of art, and curatorial practices.