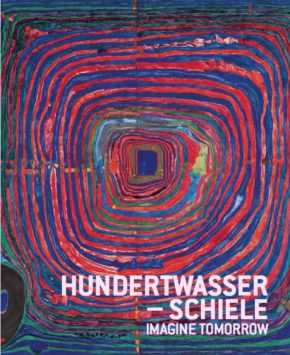 Friedensreich Hundertwasser (1928–2000) shaped 20th-century art beyond the borders of Austria as a painter, designer of living spaces and pioneer of the environmental movement.

His life-long, intense exploration of the personality and oeuvre of fellow Austrian artist, Egon Schiele (1890–1918) is largely unknown.

At the age of 20, when he was a student at the Vienna Academy of Fine Arts, the artist discovered Viennese Modernism through exhibitions and books: Schiele, especially, would later become a central point of reference for the internationally active artist.

Shining the spotlight on central motifs and themes in the works of both artists, such as ensouled nature and the relationship between the individual and society, the catalogue illustrates analogies in their oeuvres that go beyond formal similarities.

The exhibition retraces the artistic and spiritual kinship of two extraordinary 20th-century Austrian artists, who never had the chance to meet.