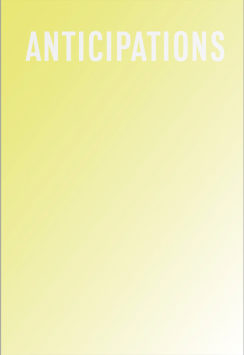 Founded in October 2013, Lafayette Anticipations – Fondation d’entreprise Galeries Lafayette, will open in 2017 in the Marais district of Paris.

A multidisciplinary centre dedicated to production, transmission, active sharing, and exhibitions, it will first and foremost be a place of experimentation and fundamental research, offering artists, designers, fashion designers, and performers conditions and tools for developing prototypes and implementing projects.

Significantly, Lafayette Anticipations has asked Rem Koolhaas/OMA to renovate a former 19th-century building and to conceive a new kind of artistic venue and curatorial tool dedicated to its core mission: production.

Stemming from the pre-opening program begun in October 2013 and concluded in October 2016 with the collective exhibition Joining Forces With the Unknown, this publication brings together never-published-before visual material dedicated to a large number of events organized and/or hosted by Lafayette Anticipations, as well as newly commissioned texts and conversations by highly recognized international art professionals and thinkers.

It provides the opportunity to revisit the moments leading up to the opening of this institution-as-laboratory, but also to discuss and anticipate the stakes of artistic production and social and cultural change in the 21st century.

Designed by Yorgo & Co (Paris), the book’s cover has been commissioned to Raphael Hefti and conceived in collaboration with the printer.