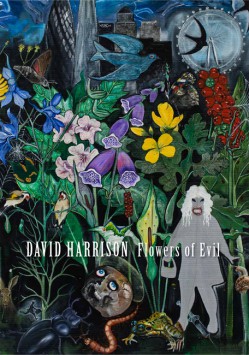 Flowers of Evil has been published to accompany David Harrison’s third solo exhibition at Victoria Miro, London, in autumn 2015.

The selection of works presents an intensely depicted universe in which the supernatural is intertwined with the natural world, musing on how modern life so often manages to destroy the magic.

Foxglove, Belladonna and Wolfsbane fairies are among the cast of potent female characters at the heart of this body of work, pushed out of hedgerows and fields by bland housing estates and barren office blocks.

Just as Baudelaire describes smells ‘corrupt, and rich, triumphant, With power to expand into infinity’ in Les Fleurs du Mal, the paintings evoke a heady, intoxicating world of scent and perfumes, which has long been a feature of Harrison’s practice.

The publication features a conversation between Harrison and Peter Doig, a newly commissioned text by filmmaker Stella Scott, and a poem by Paula Meehan.