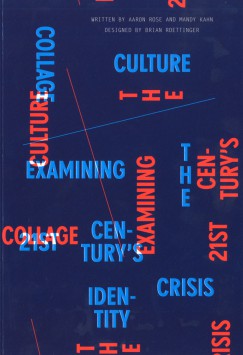 The first decade of the 21st century appears to belong to the collagist, for whom the creative act is not invention from scratch but rather the collecting, cutting and pasting of the already extant.

Collage, which began as an art meant to confound the brain with its disparate components, has jumped the flat surface, so that an astonishing number of musicians, designers and writers might be described as collage artists.

This book contains two essays by Aaron Rose and Mandy Kahn that explore the effect of this widespread trend, vividly typeset by graphic designer Brian Roettinger.

An additional centre section by Roettinger includes original works created especially for this book that imagine what might follow the age of collage.