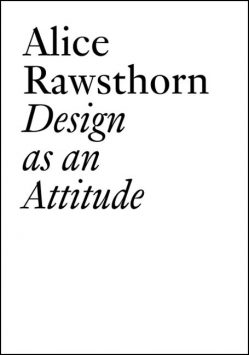 BESTSELLER – This edition of the book is now out of print. A new, expanded and updated edition is now available with the ISBN 9783037645826. To visit the product page, click here.

Design as an Attitude explains how design is responding to an age of intense economic, political, and ecological instability. It shows how resourceful designers are using new digital tools to help to tackle the environmental and refugee crises, and to reinvent dysfunctional social services.

The book charts different aspects of contemporary design: from its role in interpreting new technologies and the emergence of a new wave of digitally empowered designers in Africa, to the craft revival, design’s gender politics, design’s contribution to tackling the environmental crisis and climate change, and its use in expressing our increasingly fluid personal identities. Design as an Attitude also tells the stories of the new design adventurers, such as Irma Boom, Studio Formafantasma, Jing He, and Hella Jongerius, among others.

An award-winning design critic and author, Alice Rawsthorn OBE (b.1958, Manchester) wrote a weekly design column for The New York Times, which was syndicated worldwide for over a decade. Her previous books include the critically acclaimed, Hello World: Where Design Meets Life (2013). Based in London, Rawsthorn speaks on design at global events, including TED and the World Economic Forum in Davos.

This book is part of the JRP|Ringier Documents series, co-publishedwith Les presses du réel and dedicated to critical writing.