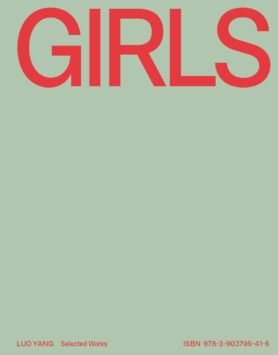 *THIS TITLE IS NOW OP*

Luo Yang is considered the shooting star of the current Chinese photo scene. This book combines essential examples from her two work series ‘GIRLS’ and ‘YOUTH’.

Since 2007 the extensive series ‘GIRLS’ has been created, a very personal examination of the photographer with women of her generation. Whether against the backdrop of Chinese megacities or in intimate settings in the private environment, the young women present themselves confident and individual, but at the same time appearing vulnerable and fragile. Apart from traditional female role models and traditional clichés, they are looking for their way to a self-determined life in the modern, rapidly transforming China.

In the series ‘YOUTH’, Luo Yang has been working with young people of Generation Z since 2019, i.e. those born in the late 1990s and around 2000. Fluid gender assignments become just as apparent as the search for individual expression between creative staging and authentic body feeling. Luo Yang paints the sensitive picture of the urban Chinese youth in search of orientation and identity.