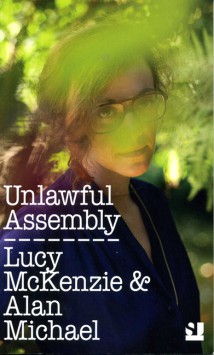 Devised as a way to indulge in their interest in literature and explore the parallels between systematic painting and formulaic writing, the artists Lucy McKenzie and Alan Michael present their collection of crime stories Unlawful Assembly.

First published in private limited edition it was intended as a cheap holiday read to titillate and entertain summer visitors to the Mediterranean island of Stromboli, and as a piece of site-specific work; the location of the action and the place in which it is read being the same.

The Unlawful Assembly cast of characters are united by narcissism, ineffectuality and paranoia, and like fast food’s ratio of fat, salt and sugar to protein, these stories confront pathology in a similarly consumable (and cynical) package of calibrated sex, violence and humour.

Lucy McKenzie and Alan Michael have familiarised themselves with the methodologies of illusionistic painting, trompe l’oeil and photorealism respectively. The visual art subsequently generated by Unlawful Assembly includes work by Josephine Pryde, with whom the artists collaborated to produce this second edition’s cover image.