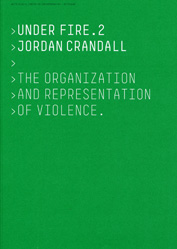 Under Fire is a project by Jordan Crandall that explores the organization and representation of contemporary armed conflict. The project consists of a series of organized discussions about a wide array of issues including battle simulation techniques and news programming, democracy and violence, the privatization of the military, and militarized bodies. The book Under Fire 2 is an edited compilation of a series of dialogues that occurred online from September through December 2004, between artists, political scientists, critics, activists and journalists. The discussions were moderated by Jordan Crandall. Under Fire 1 appeared in May 2004.