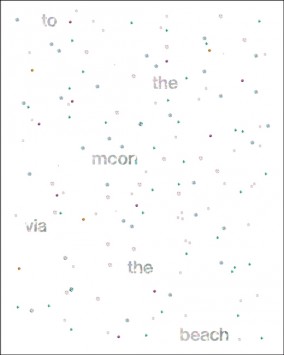 To the Moon via the Beach was a three-day exhibition in the Amphitheatre in Arles. Using tons of sand specially shipped there, the iconic arena was transformed into a beach and, during a process of non-stop activity co-ordinated by Willem Stijger, slowly mutated into a moonscape.

It created a backdrop for a series of interventions by 20 artists in and around the arena, including Daniel Buren, Fischli & Weiss, Douglas Gordon, Pierre Huyghe, Klara Lidén, Rirkrit Tiravanija, Tris Vonna-Michell, and Lawrence Weiner, among others.

This book offers a complete record of the event, and presents chronological photographic documentation, allowing the event to be reconstructed and understood as a whole for the first time. An extensive discussion between Liam Gillick, Philippe Parreno, and Hans Ulrich Obrist sheds light on the event’s historical context and its experimental potential.