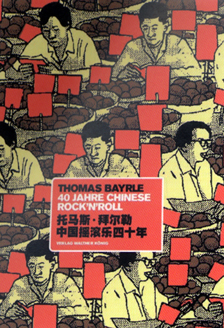 Thomas Bayrle’s unorthodox and intensive preoccupation with China has already begun very early: ‘It began with a ‘whim’ that I can no longer explain today; in 1964 I built / made / painted a ‘machine’ behind which hundreds of athletes performed exercises behind the portrait of Mao Zedong (…) I hardly pay any attention to ideological differences and – against the protests of my leftist friends – mixed communist and capitalist elements and contents together (…) According to the motto ‘technical patterns there / organic ornaments here’ I weave together warp and weft of my idea of East and West to one and the same fabric (…) Irreconcilable, ideological contraries came to resemble each other even more – and over the years fused – up to Global Rock’n’Roll whihc is playing momentarily.’

This book features large-scale reproductions, an interview with the artist by Daniel Birnbaum, Udo Kittelmann, and Hans Ulrich Obrist, and accompanies an exhibition of Bayrle’s work at Museum Moderner Kunst, Frankfurt. English, German and Chinese text.