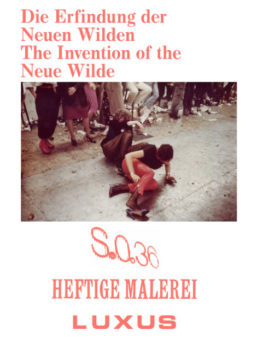 The Invention of the Neue Wilde aims to put a new perspective on the phenomena of the so-called ‘Neue Wilde’ (new Fauves), which was a term used in Germany for neo-expressionism: a movement which saw the re-emergence of expressive painting in the late 1970s and 1980s

Instead of focusing on the production of paintings by those involved – and a corresponding catalogue of these paintings – it is much more interested in the emergence of the painting boom out of potent interplay between artists, gallerists, collectors and art historians. Here the focus is especially on personal backgrounds and the context in which painters worked.

The argument shows that the artistic practices of the ‘Neuen Wilden’ had little to do with a generalised ‘return’ to panel painting and thus to a traditional concept of art. Painting was in fact embedded in an extended network of artistic production, which was particularly characterised by a destabilisation in the division between high and popular culture as well as by various media, genres and collaborative forms of praxis.

Hitherto neglected photographic and documentary material as well as artists’ posters, records, newspapers, video works and artists’ books testify to the artists’ experimental bent on one hand, their proximity to self-organised, subcultural phenomenon, such as the punk or new wave scenes of the 1980s on the other. On this basis, the much-described ‘return’ to painting can be exposed as a hugely simplified narrative, while sketching out a complex image of the situation around 1980.

Published on the occasion of the exhibition, The Invention of the Neue Wilde: Painting and Subculture around 1980 at Ludwig Forum für Internationale Kunst, Aachen (12 October 2018 –10 March 2019).