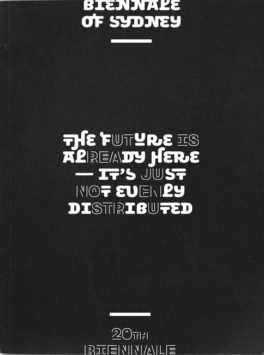 If each era posits its own view of reality, what is ours? The common distinction between the virtual and the physical has become ever more elusive, and our perception of what is real ever more fluid.

This book is published to accompany the 20th Biennale of Sydney, directed by Dr. Stephanie Rosenthal, which takes these keys themes as its starting point. Staged at several different venues, the exhibition is organised into several different ‘embassies of thought’, each of which are reflected in this beautifully-produced volume.

Traditionally, an embassy functions as a state within a state: a system that enables the occupation and creation of new spaces in established lands. This book focusses on these and other such ‘in-between spaces’, investigating our interaction with the digital world, the blurred boundaries between art forms and the interconnection between politics and financial power structures.

The future is already here… features new essays by Andre Lepecki and Franco Berardi among others, new text and visual commissions by a range of artists including Ming Wong, Dayanita Singh, Keg de Souza, Cécile B Evans, and Richard Bell, and a series of fascinating roundtable discussions with participating artists.