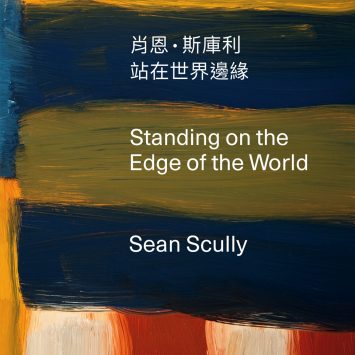 Sean Scully (b. 1945, Dublin) is celebrated internationally for his unique and impressive contribution to abstract painting over the past half a century. Standing on the Edge of the World is his first exhibition in Hong Kong.

Now dividing his time between New York, Germany and Spain, Scully’s journey with the languages of abstraction has evolved into a veritable odyssey, the horizontals and horizons perhaps pursued most clearly today in Scully’s ongoing series Landline, which brings ideas of abstraction into dialogue with the landscape.

Alongside several notable examples from this series, the exhibition also includes works from another major series Wall of Light, which began in 1998 and brought together horizontal and vertical bars in part inspired by several trips by the artist to Mexico since the early 1980s, and the remarkable qualities of light he observed falling on ancient stone walls there.

Alongside a foreword by Connie Lam (Executive Director of Hong Kong Arts Centre), this publication features an essay by curator, Alfredo Cramerotti (Director of MOSTYN Visual Arts Centre, Llandudno, North Wales) exploring notions of edges and boundaries in relation to the works in the exhibition, which include large-scale paintings, works on paper and photographic prints.

The exhibition and this publication have been produced with the support of Timothy Taylor (London and New York), and Ben Brown Fine Arts (London and Hong Kong).

Published on the occasion of the exhibition, Sean Scully: Standing on the Edge of the World at Hong Kong Arts Centre, Hong Kong (28 March – 29 April 2018).