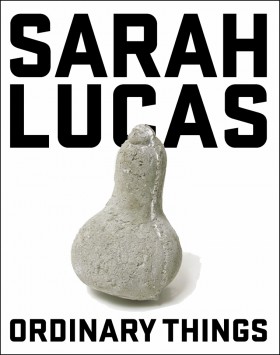 Ordinary Things brings a sculptural and scholarly approach to the work of Sarah Lucas, underlining her status as one of the most significant British artists.

Lucas’ sculptures are made of and from the human body, and from the ordinary things that surround us. In NUDS (2009–), limbs can be seen wrapping around each other in knotted couplings and solo acrobatics, the cellulite-marked flesh formed from ‘natural’ tights stuffed with fluff and stiffened by wire, the delicate surface bruised and wrinkled as the bodies perch on their breeze-block supports.

Many books looking at Lucas’ work have focused on her as a central player within British art in the 1990s. Ordinary Things offers a counter position, turning to the sculptural rather than the sensational, to identify Lucas’ consistent questioning of the definition of sculpture.