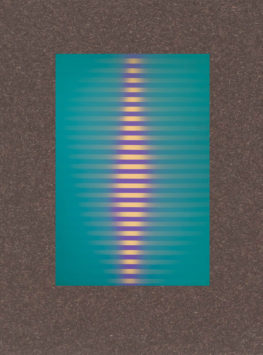 Known primarily for his conceptual photography and film projects, Colmer began creating his experimental, colour-intensive paintings in the mid-1960s, upon moving to New York after graduation from the Hochschule für Bildende Künste in Hamburg, Germany.

Inspired by the shifting artistic landscape created by the introduction of electronic media, Colmer challenged the boundaries between painting and film to develop a new kind of perception.

A selection of photographic works from the 1980s are also included in the exhibition. Arranged in a grid, they create striking contrasts between order and disorder, and focus and distortion, similar to the tension between the field and centralized figure in the early spray paintings.

Published on the occasion of the eponymous show curated by Alex Bacon at Lisson Gallery, New York (13 January – 18 February 2017), focuses on a selection of the artist’s earliest spray-gun paintings, most of which have never been exhibited, and a selection of late photo collages.