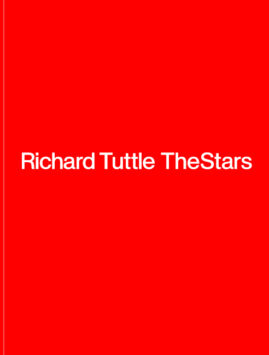 Richard Tuttle’s new body of sculptures, ‘TheStars’ were made for Modern Art (London) during the summer of 2019 at his home and studio in Mount Desert, Maine.

The works are small in scale, each sculpture’s spontaneous construction belying an unparalleled potency and elegance. As such, ‘TheStars’ bears a clear resemblance to some of Tuttle’s early work from the 1970s, such as his iconic ‘Rope Piece’ (1974), which came to typify his bold approach to scale.

As well as in their size, the modest, simple materials employed in ‘TheStars’ share the same essence characteristic of the sculptural language used throughout Tuttle’s career.

Made predominantly from plywood, paint, paper and metal wire, each work sits atop its own hand-made shelf, annotated by Tuttle with its particular title, and secured to the wall with a single nail.

Thus in scale, material and formal arrangement, ‘TheStars’ marks a new stage in the continued evolution of Tuttle’s distinctive vocabulary whilst also reflecting something of its origins.

The new series – like all Tuttle’s work – remains deeply sensitised to the interplay between the most granular, material experiences and a sense of an immense, perhaps cosmic, ambitious unknowability.

This beautiful catalogue features images of all the pieces from the new series and includes the artist’s rarely published poems.

Published on the occasion of the exhibition, Richard Tuttle: TheStars at Modern Art, London, 1 October – 21 November 2020.