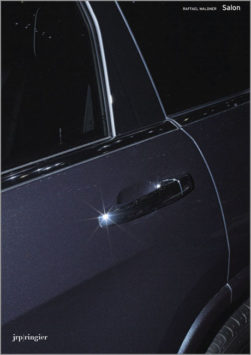 In this new book Waldner focuses on motor shows, the places where new cars are presented to the public for the first time.

Waldner photographs the models in the same way that he shows the cars: with objective coolness, isolated from any context.

As Jürgen Haüsler writes in his essay: ‘Waldner’s photographs are illuminating: they show the before and after of the mise-en-scène at the motor show. Viewed from this angle, one is oppressed by the emotional emptiness of the exhibition halls, the coldness and unapproachability of the exhibits themselves, and the degrading uniformity that has been imposed on the workforce…’

Gathering together 100 photographs from the Salon series realized in Paris, Frankfurt, and Geneva between 2011 and 2016, as well as essays by Martin Jaeggi, critic, curator and lecturer, and Jürgen Haüsler, former Chairman of Interbrand Central and Eastern Europe, this book allows an intimate insight into a world full of aesthetic attitudes, superficialities, and materialistic dreams.