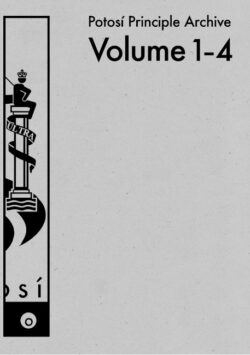 The Principio Potosí Archive is a collection of historical and contemporary sources, interviews, essays, poems, manifestos and images.

The term Potosí Principle refers to the persistence of the extractivist logic that began with the conquest of South America until now.

The exhibition discussed this through the colonial baroque images and their response by contemporary artists. It became a milestone in the postcolonial questioning of the origin of modernity and the function of art in it.

Published on occasion of the project ‘Principio Potosí Archive’, curated by artists’ Alice Creischer and Andreas Siekmann, which toured to the following venues:

This publication consists of 4 volumes in a slipcase.

£58.00
Buy now
(Your order will be fulfilled by Ingram Publisher Services)