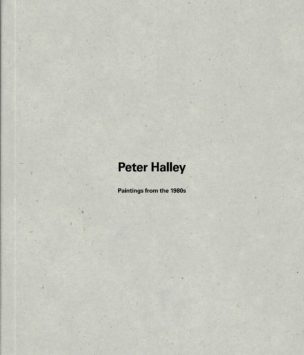 Published alongside a solo exhibition of works by Peter Halley from the 1980s (at Modern Art, London, 27 January – 18 March 2017). It comprises a selection of paintings that surveys an important period of Peter Halley’s work, dating from 1982-1987.

Over the past four decades, Peter Halley has pursued a rigorous, theoretical approach to painting that takes influence from structures of organisation and communication.

The works in this book of the exhibition show development during this decade of relationships between flat and textured geometric elements that the artist refers to as ‘cells’, ‘prisons’ and ‘conduits’.

For Halley, these elements comprise a formal vocabulary that reflects the increasingly geometric divisions of social spaces of the world in which we live. Halley’s work is consistently concerned with abstraction not only in art, but in broader terms of culture and human behaviour.

The paintings Peter Halley made from the early 1980s onward contribute to what might now be considered the postmodern canon.

Halley, together with his artist peers Jeff Koons, Haim Steinbach and others, came to international prominence during that decade with varied approaches to art making sometimes identified as ‘neo-geometric conceptualism’ or ‘Neo Geo’. These artists were making new work that proffered critique of both expressionism and non-objective abstraction, in a context informed by contemporary ideas about social control, mediation, and simulation.

Peter Halley has written on art and culture throughout his career. His essays, first published during the 1980s, address postmodernist culture, contemporary art practices, and that decade’s digital revolution through the lens of post-structuralist critique.