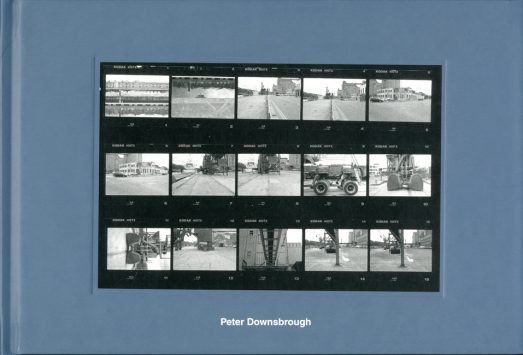 CORK CITY is a sequence of photographs from the eye and lens of Peter Downsbrough, one of the pioneering American conceptualists, who permanently moved to Europe at an early stage of his working life.

There is always constant measure in the photographs of Downsbrough, and these pictures capture the unchanged focus of the city, its docklands, its repeated verticals and horizons.

They were made at the time of his visit to Cork to exhibit in the exhibition, In Other Words at the Glucksman Gallery, Ireland in 2011, and this artist’s book has been some time in the making.

Born in New Jersey in 1940, Peter Downsbrough has since the late 1960s been among the leading artists whose work oscillates between Minimalism, Conceptual Art, and visual poetry.

His work consists of lines, letters, cuts, and the spaces in between, which relate to architectural space and call into question the linearity of both space and language.