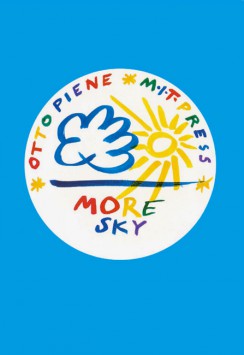 More Sky was initially published in 1970 as a loose-leaf ring binder, and now the 1973 edition is reproduced in facsimile here. The book may be considered the first compendium of Piene’s work after the ZERO period in Germany.

The title itself is a programmatic attempt to expand the arts. More sky – that was the dream of Otto Piene and his generation, to overcome at last the narrow confines of museums and instead to turn public space, the air and the sky into a site where art happens.

Nature as a model for the arts: as was already the case in experiments within the Bauhaus tradition, Piene intended to execute his artistic works in the dimensions of earth, water and fire, and ultimately into technological media as well.

The vibrant, colorful cover of his book, featuring a hand-painted title, the sun and a floating cloud, perfectly reflects this exhilarating utopia of a better world, closer to nature.