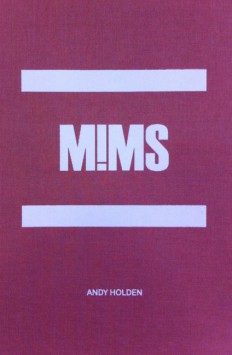 It details every stage of the project’s development, from the initial sketches to the final installation and includes contributions by Catherine Wood, Gil Leung and Fiona Parry.

MI!MS, is an art movement founded by Andy Holden and his teenage friends John Blamey, Roger Illingworth, James MacDowell and Johnny Parry, while growing up in Bedford from 1999-2003.

At the heart of the endeavour was a response to what the MI!MS members felt was a cynical, overly knowing culture and they sought to address this through attempts to create work at once ironic and sincere.

A decade later and now a practicing artist, Holden painstakingly excavates this period, tracing its history in a seven-part, feature length film, screened within a large-scale, densely layered sculpture made of various sets and including artworks featured in the film.