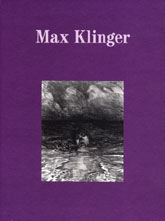 This is the first major presentation of Max Klinger’s extraordinary work in the UK for many years. Drawn from the collection of the Museum der Bildenden Kunste, Leipzig, the final list of works was determined by a curatorial team that included Christiane Baumgartner, the Leipzig-based artist whose solo exhibition took place at Ikon at the same time. For Max Klinger, printmaking, and specifically etching, was a major part of his artistic output. He insisted that this kind of work, drawn and monochrome, had the greatest potential for poetic invention, and that painting, by contrast, was more suitable for the representation of the material world. Born in 1857, Klinger finally achieved public acclaim through an exhibition at the Leipzig Museum in 1892.