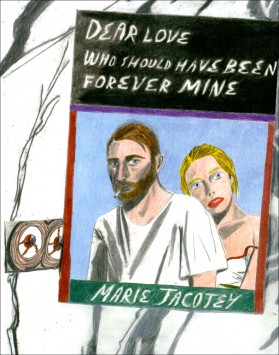 Marie Jacotey (b.1988, France) is equal parts storyteller and artist. Her work is full of unresolved narratives and fleeting moments, placing us in the position of voyeur as we observe quiet dramas play out in her vivid, playful style.

Taking drawing as her starting point, Jacotey paints oils onto plastic, hung using static electricity. This process gives the work an ephemeral quality, as if the work is every bit as fleeting as the subject matter.

Having been chosen as one of Bloomberg New Contemporaries in 2014, Jacotey has been exhibited widely over the past year and her work will appear in several group shows in 2015 and 2016.

Rather than producing an exhibition catalogue, Jacotey has decided to make an artist’s book (containing 30 individual prints) to coincide with her second solo show in London, at Hannah Barry Gallery, which opened in September 2015.

For this, her first artwork in book form, Jacotey and design studio Stinsensqueeze investigate innovative printing techniques to replicate the material qualities of this exciting work.

This new monograph was launched in September 2015 at Hannah Barry gallery, and TenderBooks in London. In the October the book was launched at The Broken Arm store in Paris (to coincide with FIAC).