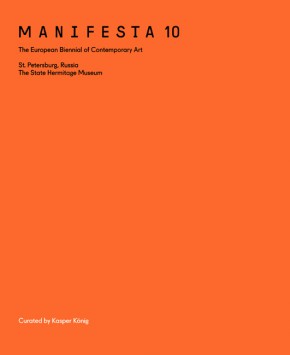 The State Hermitage Museum in St. Petersburg was selected by the Manifesta Foundation to host its tenth biennial because of its critical, intellectual and historical relationship with East and West Europe: a uniting principal that is also central to Manifesta.

For the first time, Manifesta is hosted by a museum, uniting the State Hermitage Museum’s 250th anniversary and Manifesta’s twentieth anniversary as a nomadic biennial of contemporary art.

Manifesta 10 (28 June – 31 October 2014) considers the historical perspective of St. Petersburg’s view to the West, and its extensive relationship with Europe at large. Over 50 artists were invited by curator Kasper König to illustrate their own sections in the catalogue.