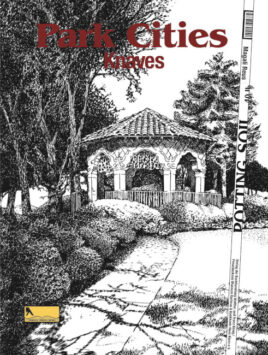 As though in an al fresco portrait studio, the fungi are posed against backdrops of colourful vintage t-shirts – synthetic intrusions into the natural landscape.

This beautifully designed artist book sets images from the series within the sepia-tinted pages of a 1990s telephone directory for Park Cities – an area of Dallas whose name acts as shorthand for the way in which urban design domesticates nature for ease of human use.

Novelist, Kathryn Scanlan’s text zooms in on a series of fleeting quotidian dramas, mobilising a cast of evocatively named characters that, like Reus’ fungal protagonists, bloom and then disappear.