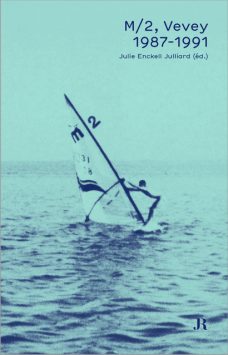 Founded by Jean Crotti, Alain Huck, Robert Ireland, and Jean-Luc Manz, with Christian Messerli and Catherine Monney, M/2 was located in an 80m2 apartment in Vevey, on Lake Geneva’s Riviera.

Its purpose, its ‘utopia’, as its members called it at the beginning, was to offer young practitioners an artistic laboratory and a place of exchange between French and German-speaking Switzerland. They also wished to arouse the interest of the local audience in contemporary art, in particular by exhibiting art differently, in a private space, as part of the everyday life.

As Julie Enckell Julliard states in her essay:

‘The goal pursued by the collective that opened an artist-run space in an apartment, was to live a new and shared experience of art in order to test all of its aspects. M/2 asserted first a modus operandi governed by spontaneity, and the necessity of experiencing the phases of a project’s construction together: from the encounter with the artist and their work, to the mounting of the exhibition, to the dialogue with the public at the moment of the opening.’

Edited and introduced by Julie Enckell Julliard, Director of Musée Jenisch Vevey, this publication extensively documents the exhibitions and activities of M/2, a local but emblematic example of an artistic and curatorial collective practice.

Part of the Hapax Series, by JRP|Ringier.