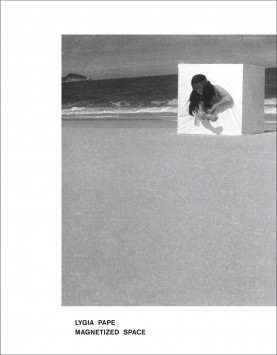 Brazilian artist Lygia Pape was a founding member of the Neo-Concrete movement, which was dedicated to the inclusion of art into everyday life.

Her early work developed out of an interest in European abstraction; however, she and her contemporaries went beyond simply adopting an international style, and started to draw on their own local situation.

Neo-Concretism is often seen as the beginning of contemporary art in Brazil, and Pape’s work – which focus on the coming together of aesthetic, ethical, and political ideas – has formed an important part of Brazil’s artistic identity.

Linked to Grupo Frente’s Concretism, the artist aligned herself with other artists such as Lygia Clark and Hélio Oiticica, and poets such as Ferreira Gullar.

However, Pape’s work, with its focus on poetry, writing, and experience, did not receive the same critical attention as that of her contemporaries.

The texts in this monograph explore the artist’s efforts to create a language that echoes a new order of sensation and sensibility.