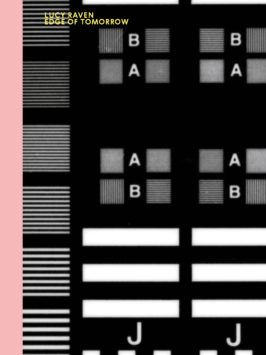 This catalogue is a direct continuation of Ravenʼs working methods through its collaborative format and multifaceted structure. It brings together a series of commissioned texts, visual essays, stills, and film notes, which examine time and the image from a multitude of perspectives.

The book also contains film notes to accompany a series of weekly film screenings curated by Raven, which showcase classical Hollywood and independent feature films that have inspired her artistic trajectory.

Raven’s work focuses on the marginal spaces at the edges of image production, what happens behind the camera or between the frames of a film or animation. She follows the production of copper wire from an open pit mine in the American West to a smelter in southern China in China Town (2009).

She observes post-production technicians converting Hollywood films to 3D in Chennai, India, linking the digitally created illusion of depth to ancient Indian bas-reliefs in The Deccan Trap (2015). This shift of focus from the image to its production encourages interrogation of the kind of imagery that has become all too familiar.

Edge of Tomorrow brings together a diverse selection of works in a site-specific installation within the spaces of the Serpentine Gallery. At the heart of the exhibition, a cinematic space features the animated film Curtains (2014), in which a series of still stereoscopic images converge and diverge, becoming momentarily three-dimensional when viewed through anaglyph 3D glasses.