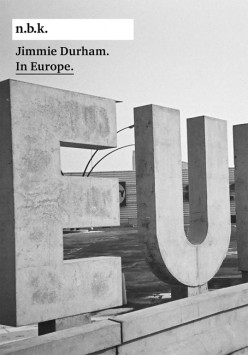 Jimmie Durham began to work as a sculptor in 1963, when at the same time he had been politically active in the American civil rights movement since the early 1960s.

In 1987, he left the US, first settled in Mexico and finally in 1994 in Europe. In 2012, in his contribution to dOCUMENTA (13) called The History of Europe, Durham dealt with the idea of Europe and unmasked it as a geopolitical invention.

In his artist’s book In Europe, Durham assembles portrait photographs of himself in various places and in situations that show the word ‘Europe’.

Published on the occasion of the exhibition, Jimmie Durham: Here at the Center at Neuer Berliner Kunstverein (n.b.k.), 6 June – 2 August 2015.