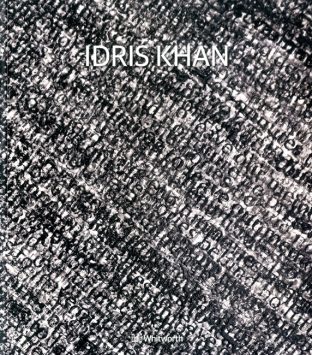 Idris Khan draws inspiration from the history of art, music, philosophy and theology, laying and manipulating images and text in a conversation around memory, experience and society.

Focusing on the mediums of painting, drawing and photography his exhibition at The Whitworth presented several of his recent seminal works including, Eternal Movement (2012), a photograph inspired by part of the Hajj where devotees walk back and forth seven times between two mountains near Mecca; and The Rite of Spring (2013), created from layering photographs together of the entire score of Stravinsky’s controversial orchestral masterpiece.

Inspired by Kasimir Malevich’s iconic and influential ‘black square’ painting, Khan composed his own very different black square paintings by writing a text with thick oil sticks over and over again on paper. The artist also created a new monumental wall drawing within the gallery space entitled, True Belief Belongs to the Realm of Real Knowledge (2016).

This was Khan’s second exhibition at The Whitworth. In 2012 he exhibited The Devil’s Wall (2011) three large, black, cylindrical sculptures, with selected texts from the Quran in Arabic and English, and a series of drawings, 21 Stones. All these works were created in reference to the ritual stoning of the Jamarat (a pillar representing the devil), which is an important part of the Hajj pilgrimage.

Published after the exhibition at The Whitworth, University of Manchester, 14 October 2016 – 19 March 2017.