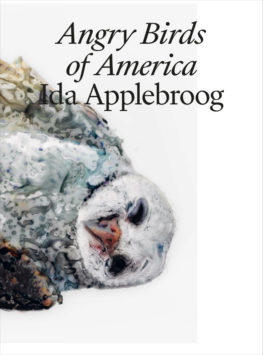 The exhibition ‘Ida Applebroog’ at Kunstmuseum Thun represents the first time that work by this American artist has been the subject of a solo show in Switzerland, and the series ‘Angry Birds of America’ (2018) is the very first time that her work has been shown at an institution.

Applebroog loves birds and is interested in ornithology. Her work is very much influenced by the drawings of American ornithologist and graphic artist John James Audubon, who made a name for himself with his book ‘Birds of America’ (1827–1838), with its life-sized illustrations of North American bird life.

In Applebroog’s oeuvre the ambivalence between life and death is tangible. A number of her birds look as if they have fallen down dead from a power line.

For Applebroog, they are closely connected to her perception of current American politics and the Trump era. According to her, there is a lot of anger, a lot of rage, not only in her but throughout America. Her feelings were that whatever she did had to do with angry, irate, dead birds.

Applebroog gets the feeling that she is living in a world in which we are all angry, irate, even mad.

The publication accompanies the exhibition ‘Ida Applebroog’, 9 Feb – 19 May 2019, Kunstmuseum Thun and was produced in close collaboration with the artist.

It features an article by Prof. Jo Applin, which goes into depth about this attitude to the current situation in the world.