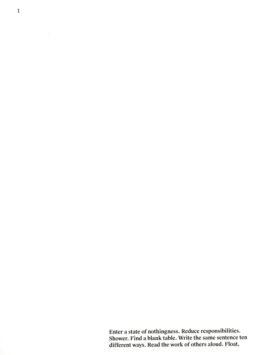 Where to begin? How to begin? Creation can only emerge from that which already exists. One begins wherever one is. The beginning of the book is the middle of a sentence which will begin (has begun ?) at the end of the book.

How to Begin grew out of the Ratti Foundation’s XXIV CSAV – Artists’ Research Laboratory, lead by Christina Mackie in Como, Italy, in the summer of 2018. It takes inspiration from reflections born out of daily encounters with Mackie and with the Como’s Sant’ Elia kindergarten – an extraordinary  building designed by Giuseppe Terragni in 1937 – that became our work space; in which we began to tackle the many different aspects of the deceptively simple question posed by Laboratory’s title.

Books, like beginnings, flourish in the middle, at the page casually opened by the reader, far from the beginning and its implied end. The first page of a book is a beginning but not the beginning. Beginnings are happy places inhabited by an ecstatic feeling that everything is about to happen. We have tried to create a book with no beginning and no end.

How to Begin has been conceived by Gregorio Magnani in collaboration with the participants and designed by Daly & Lyon. The publication gathers special projects by the participants a semi-narrative thread stemmed from the workshop Methods for Beginning by Kate Briggs and a series of miss-translations of the first tercet of Dante’s Divine Comedy. These elements are joined by a wide selection of Terragni’s preparatory drawings for the kindergarten and of his photographs of the original architectural models.