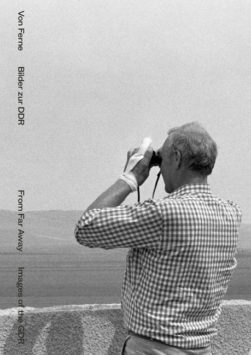 Celebrating 30 years since the Berlin Wall came down, an artfully designed collection of private and professional photography from the former GDR. — Staff Pick / Henry

From Far Away: Images of the GDR features photographs from, and about, the GDR (East Germany, officially the German Democratic Republic which was a country that existed from 1949 to 1990, when the eastern portion of Germany was part of the Eastern Bloc during the Cold War).

The works on display are photographs by others and of their own (used again) that the artists have appropriated and re-released for fresh viewing.

Some of these works go beyond appropriation on the visual plane to interlock image and text in transmedial approaches, using one as the foil to the other and vice versa.

All these pictures tell of places and situations as they once were. Nonetheless, the question arises of what reality a picture represents, especially when new, different relationships are created between images through artistic intervention.

Dealing with the visual legacy of the GDR means not only revealing traces of reality going back to a time past: From Far Away is less concerned with the production of pictures and their potential for recording snippets from space and time than it is with the stores of knowledge they conceal and their multiple meanings.

The specific contexts in which the photographs were taken and the times at which they were shot are visible, yet, most importantly, the question arises of how they are to be further dealt with and to which other semantic planes they have been, and are being, transported.

Published on the occasion of the exhibition, Von Ferne: Bilder zur DDR / From Far Away: Images of the GDR at Museum Villa Stuck, Munich (6 June – 15 September 2019).