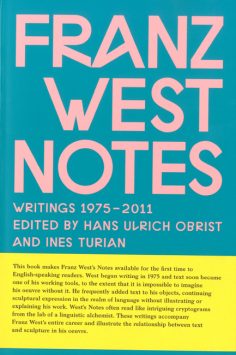 He attached these texts to his sculptures, continuing the sculptural expression linguistically without illustrating or explaining.

In places the titles, epithets and texts can raise awareness of the sculpture’s form, in others they can drive the viewer mad or fascinate like the cryptograms of a lingual alchemist.

Texts accompany Franz West’s complete oeuvre. Thus far, more than 200 have been created and they are published here in their entirety for the first time in a newly edited form, as facsimiles and in transcriptions.