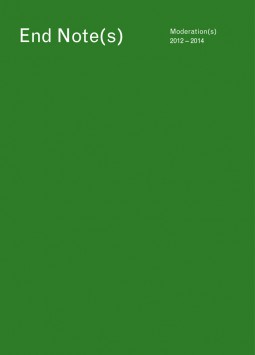 Over the course of two years, from 2012 to 2014, Moderation(s) saw a sprawling ecology of artists, curators, and writers gather around different formats of inhabitation, production, and exhibition making.

Essays were viewed as works of fiction, language as image, sculpture as situation. An extension of this approach, End Note(s) focuses on interpretations of and reflections on what has been said and what has been done during Moderation(s).

Each project installment of  Moderation(s) – including three residencies, a series of performances, a conference and an exhibition– questioned or redefined the conditions of creating objects, situations, and stories.

Allowing for chance encounters and improvisation to often take the lead, the program reveals itself through its participants more than anything else.

Driven by the desire to return to the specific nature of creative processes of production, doing preceded defining.