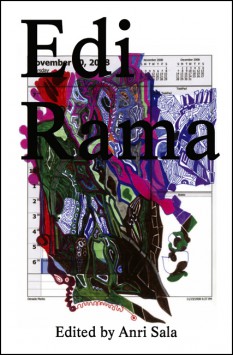 This limited edition book has been developed from a selection of doodles produced by Edi Rama between 2000 and 2012.

Edi Rama is an artist and politician from Albania who, following the collapse of communism, became involved with the first democratic movements. He left Albania for France in 1994 and lived there as an artist, participating in different exhibitions and biennales. He returned to Albania in 1998 and became Minister of Culture, Youth, and Sports from 1998 to 2000. Since 2005, Rama has been the leader of the Socialist Party of Albania.

It is uncertain if Rama’s doodles are the fruit of close attention or daydreaming. Made on printouts of his daily agenda, office notes, protocols, faxes, and other official correspondence, the drawings are like a stream of lava, loosely binding the day-to-day grind.

While his mind focuses on the political context of the discussion, his eyes are focused on the paper, following his hand that draws, like a spiritual medium, his inner experience. The drawings are accompanied by four one-to-one conversations between Edi Rama and Michael Fried, Philippe Parreno, Marcus Steinweg, and Erion Veliaj.