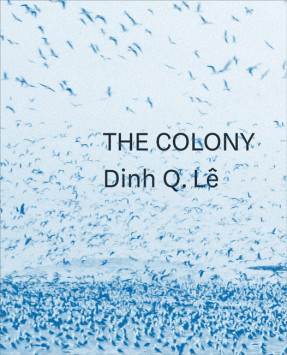 The Colony is loosely based on 19th century depictions of a cluster of islands off the west coast of Peru, rich in guano, a powerful fertilizer.

Exploring the drama of absurdity, greed and human suffering, all for the brown gold of bird excrement, Lê’s narratives touch on aspects of the islands’ history such as the nineteenth century imperial wars between Spain and its former colonies Peru and Chile, and the US Guano Act of 1856 that authorised over one hundred claims for uninhabited islands, reefs and atolls in the Pacific and Atlantic.

For The Colony, Vietnamese artist Dinh Q. Lê has filmed the islands from a number of different perspectives, from a boat circling the land and video drones giving a bird’s eye view. Also we see labourers involved in the backbreaking work, transporting and loading the guano onto boats.

The arid and unforgiving landscape and the drones’ unmanned explorations of empty and abandoned buildings, with their traces of existence from past inhabitants, leave viewers in no doubt of the human suffering and isolation that haunt the island landscapes.

This catalogue features stills taken from a series of films that have been specially commissioned for the show at Ikon. It also  includes an interview with the artist by curator and writer Zoe Butt and texts by Dr Frank Uekotter, Reader in Environmental Humanities, University of Birmingham and Moira Roth, Trefethen Professor of Art History, Mills College, California.

Published on the occasion of the exhibition Dinh Q. Lê: The Colony, at Ikon Gallery, 27 January – 3 April 2016.