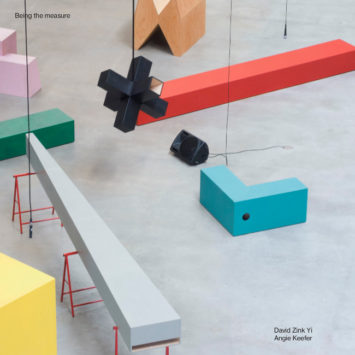 Being the Measure (2016) is a performance and video work created by artists David Zink Yi and Angie Keefer. This special vinyl LP record (and accompanying booklet) documents the work.

Interested in the ways identity finds expression through the body, Zink Yi is known for video installations that dwell upon physiological aspects of musical perception, and for large-scale sculptures of squids and octopuses, animals whose apparent physical identity may change dramatically as a form of communication or defence.

Zink Yi developed a passion for Cuba’s music, history, and culture when he travelled there in 2001 and began studying Afro-Cuban percussion. He draws an analogy between a cephalopod’s limbs, which operate relatively independently from the animal’s central brain, and the ‘independence’ achieved by some advanced musicians, particularly percussionists, whose limbs take on seeming autonomy when they play.

Angie Keefer is an American artist, writer, teacher, and publisher, who produces objects, images, texts, talks, performances, and public programs, often in collaboration with other artists and institutions.

Published after the exhibition, Being the Measure at Williams College Museum of Art, Williamstown (10 June 2016 – 2 December 2017).