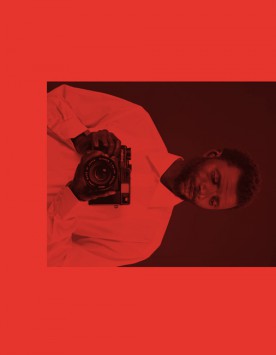 In the 1970s, Christopher Williams emerged as a key figure in the first wave of American West Coast conceptual artists, which included John Baldessari and Douglas Huebler.

Williams’ work is a critical investigation of the medium of photography and more broadly the vicissitudes of industrial culture, in particular its structures of representation and classification.

Using the process of reproduction as a point of entry, he manipulates the conventions of advertising, the superficiality of surface, and ultimately the history of Modernism.

This unique artist’s book is available in three editions, each with different ISBNs and different colour covers: red, yellow and green. However, with the exception of differing cover photographs, the content of each edition is identical.

Published to coincide with Williams’ first major survey exhibition, The Production Line of Happiness at The Art Institute of Chicago, and then at The Museum of Modern Art, New York – both in 2014. The exhibition travelled to Whitechapel Gallery, London in 2015.