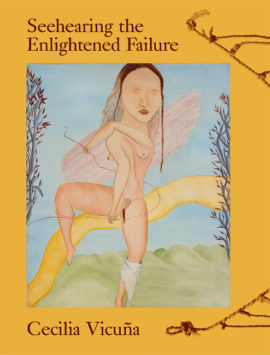 This retrospective book brings together over a hundred works by the poet, visual artist, and activist Cecilia Vicuña (b. 1948, Santiago, Chile).

Since the 1960s, the artist has constituted a radical perspective on the relationship between art and politics through her writing and art making. She has done so in different parts of the world, leaving her native Chile for London in 1973, before basing herself in the United States in 1980.

The 1973 military coup d’état in Chile shaped the structures of feeling in Vicuña’s formative years. Her work is triggered and inspired by political resistance. Feminist and sociological methods, as well as indigenous culture and natural materials imbue her art practice.

For decades, she has developed a varied and multidisciplinary body of work: from her long-term quipu, precarios [precarious objects], and palabrarmas series, through to her painterly works, her work made in solidarity with Vietnam and as part of the collectives Tribu No [No Tribe] and Artists for Democracy, as well as a number of her films which demonstrate artist’s extensive performance practice.

This publication brings together five essays on Vicuña’s work (eminent writers include Dawn Ades and Lucy Lippard), and an anthology of texts written by the artist. Also featured is a plethora of artwork images and visual documentation organised in thematic sections.

Published in partnership with The Institute for Studies on Latin American Art (ISLAA), and Museo Universitario Arte Contemporáneo (MUAC), Mexico City, on the occasion of Cecilia Vicuña: a retrospective exhibition at Witte de With, Rotterdam (26 May – 10 November 2019).